Members of the Biograph Company often trooped to New Jersey for location shooting, but the harsh New York winters made outdoor filming iffy at best. So D.W. Griffith sought and received approval to take a portion of his company to California from January to April of 1910. Mary Pickford was chosen, along with Billy Quirk, Henry B. Walthall, Mack Sennett and over 40 other cast and crew, to make the five-day train trip to the West Coast. At the last minute, Jack joined them as well. Charlotte gave her approval because she liked the idea of someone – even if he was only 14 – keeping an eye on Mary. Mary was glad as well, primarily because she wasn’t happy about being away from her family for four long months. 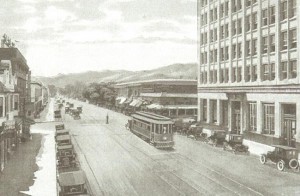 Los Angeles in 1910 was part boom town, part frontier. Hollywood, with a population of 166, had been founded seven years before by a Prohibitionist from Kansas and it was just one of forty incorporated towns within a thirty-five-mile radius. The actors dressed at their hotels before trekking to the fenced-in acre of land they used as their base of operation. (Hence the term “shooting on the lot.”) A flat stage was built a few inches off the ground with wire along the top to hold cloth shades that provided the backgrounds for interior shots. There was no roof to make full use of the sun. Tents dotted the fences to serve as makeshift offices and changing rooms. (Booton Herndon says it was at the corner of Grand Avenue and Washington Street, though Mack Sennett remembers it at 12th and Georgia.) 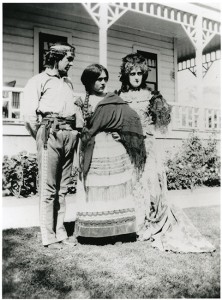 Jack and Mary shared a room and then shared a bathroom with two other actresses, keeping their expenses below their allotment, but Mack Sennett overspent on a room with a bathtub at the Alexandria Hotel. Mary and Jack learned to ride horses for their films and to get around town. Griffith was the only one with a car, but there were also the trolleys that were beginning to connect the area. The company made full use of the incredible variety of locations the area had to offer; The Unchanging Sea was shot on the Santa Monica beach, Never Again featured Mary in a rowboat on a Venice canal, A Rich Revenge used the oil rigs of Edendale and Ramona is laced with shots of the Santa Monica mountains and its canyons. The still near-pristine San Fernando Valley provided rolling hills for several films. California-based actors were brought in when needed, including Jeanie Macpherson, who would go on to be Cecil B. De Mille’s longtime screenwriter, and the future star Mae Marsh, then a child actress. For Mary, the trip to California was no vacation; her focus, six days a week, was work. Besides the poppies and the palm trees, she didn’t find much to love about Los Angeles.

Mary also took advantage of Griffith’s request for story ideas and started selling one-page scenarios to him for 10 or 15 dollars each. She even sold a few to Essanay Studio, a Chicago-based outfit that was the only other major film company in the area at the time. It would be three more years before a feature-length film was made in Los Angeles: Cecil B. DeMille’s The Squaw Man.

Jack was also working almost every day, taking falls as a stunt double as well as appearing as an actor when the parts called for it. But he also began his lifelong passion of making plenty of time for fun. As Booton Herndon summed it up, “by the time he left Los Angeles, Jack, at fourteen, was well educated in whisky and women.”

With Jack getting his 5 dollars a day, Mary’s guaranteed salary and the additional income from story writing, as well as keeping their expenses below the allotted 14 dollars a week, Mary and Jack returned to New York four months later with $1200. They surprised their mother and sister with it all in cash and Mary called it “the beginning of affluence for the Pickford family.”