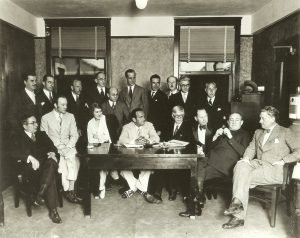 Mary Pickford’s involvement with the Academy of Motion Picture Arts and Sciences began before there was an Academy. One of the early organizational meetings was held over dinner at Pickfair and she joined several other group discussions at the Roosevelt Hotel. When the initial group of 36 founders revealed the creation of the Academy in 1927, Mary was one of only three women (The screenwriters Bess Meredyth and Jeanie MacPherson were the other two.) Mary’s husband, Douglas Fairbanks, served as the first President of the Academy.

Those first years of the Academy were tremendously important. While Louis B. Mayer saw it primarily as a bulwark against unionization, Mary saw different benefits. She and Doug immediately went to work on a lecture series on filmmaking at the University of Southern California, creating the first course on the history of film, hoping it would set the groundwork to elevate filmmaking to the status of other fine arts.

Mary also firmly believed in the potential advantage of bringing together the crafts people behind the camera as they transitioned from silent films to sound. “Most people didn’t realize it, but Hollywood was practically in a state of siege during the transition, Mary said in a 1947 interview with Erskine Johnson. “Everyone was bewildered, panic stricken. The Academy assembled all the technicians in the industry. They exchanged ideas and knowledge.” Their findings were published by the Academy and in various journals to share the information widely. As Mary concluded, “Out of that exchange, sound pictures got on an even keel.” 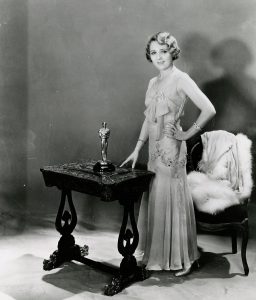 Pickford had other big dreams for the Academy. She suggested a National Theater where screen actors could on occasion return to the stage, new actors could be encouraged and audiences for theater expanded. She also envisioned Academy sponsored internships with accomplished Academy members serving as mentors. Mary often spoke of the need for a museum about the history of filmmaking and mentioned Pickfair as a possible site.

Mary Pickford was proud of her history with the Academy and revered the Academy Award as “a symbol of the commendation and approval of our fellow artists and artisans of the intimate and personal world of the motion picture industry.” She put her Award for Best Actress in Coquette in a place of prominence in her home, moving it occasionally from a table in the living room to the mantle place. In fact, when she visited Frances Marion’s home and saw she was using one of her Academy Awards for a door stop, Mary said she was “indignant” and “departed at once. I rushed back to Pickfair, fetched a stepladder, and perched my Oscar on the highest resting place in the room.”

In January of 1979, Mary placed her substantial collection of photographs, documents and other memorabilia at the Academy of Motion Picture Arts and Sciences library to establish The Mary Pickford Collection for use by students and scholars. In 1983, the Mary Pickford Foundation granted money to support the Collection and continues to this day to archive documents, scrapbooks, materials and memorabilia there.

Hear an audio interview with Mary Pickford about the Academy »