The Pinkerton Report that spurred the founding of United Artists 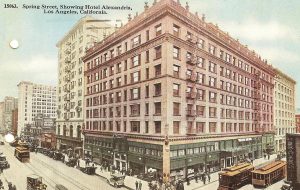 The Alexandria Hotel on Spring Street in Los Angeles was the place to stay for out of towners and for local film folk to congregate in the late teens, to see and be seen. It was the also the site of various conventions and more informal confabs, such as when the “big ones” from First National came together in January of 1919.

Rumors of what that company was planning next were flying and the Los Angeles Times ran a small item saying it was expected that “some hugely significant announcement [is] to be made within the next few days.” (LAT 1/8/1919) 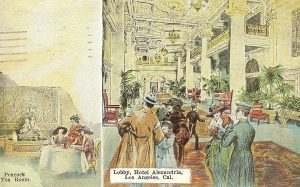 Mary Pickford, Charlie Chaplin and Douglas Fairbanks had reason to be concerned that any such announcement could impact both their salaries and their control over their films so they approached the Pinkerton Agency, spelled out their concerns, and hired them to go undercover at the Alexandria. The Pinkertons had risen to be the preeminent detective agency in the country primarily through their union busting, but they had both male and female agents and they went to work on behalf of their new clients.

RE: ACTIVITIES OF OPERATORS 5 AND 8 AT THE ALEXANDRIA HOTEL

The following information was prepared at the request of clients 2131 and 2132. Reports and other supporting information from Operators on the case are appended to this report. I must stress the very sensitive nature of this information in light of both our clients and the rather large amounts of money involved in these discussions.

Both operators were able to meet and talk with several subjects. In particular Operator 8 was able to discuss details pertaining to our clients and several other persons of note in great detail. It seems reasonable to assume, in the light of the information which was gathered, that the subjects in question are planning on perpetrating what our clients would consider a gross act of monopolism, threatening their ability to continue their work and pursue their livelihood.

Active investigation took place over the course of several days at the Alexandria Hotel during a meeting of producers concerned with the future of distribution of motion pictures throughout the country. Standard procedure was observed in the gathering of all information and it is the firm belief of the operators in question that they were undetected by the subjects.

I must stress the very sensitive nature of this information in light of both our clients and the rather large amounts of money involved in these discussions. Both operators were able to meet and talk with several subjects. In particular Operator 8 was able to discuss details pertaining to our clients and several other persons of note in great detail. It seems reasonable to assume, in the light of the information which was gathered, that clients 2131 and 2132 have due cause to act upon the situation at hand.

He stated his name was Harry, and that he would try and see me later in the p.m. Within hours, 10 p.m., this gentleman came to see me, stating that he had to go up to the twelfh (sic) floor to see Mr. Zukor and that Clara Kimball Young was up there, but that he would be back in a few minutes. At 10:35, he returned and sat in a chair and smoked. He asked if my home was in Los Angeles. I told him no it was in Kentucky, but that I came from San Francisco here. (sic) He then asked me if I was interested in the pictures. I said no, but that I always enjoyed looking at a good picture. He then stated he was here from Detroit, Michigan, and that they were holding a meeting in regard to the releasing of pictures. He then asked me who my favorite actress was. I told him Clara Kimball Young and Norma Talmadge. He asked me if I knew how much Mary made. I told him no. He said that she got the biggest salary of any moving picture actor or actress. I remarked that I had heard that Charlie Chaplin had received the highest salary, and he said no indeed. I then said I did not think it right for Mary and Charlie to receive such salary when there are others that are just as good. He said “That’s so, too, and their salaries will have to be cut. For we picture men cannot pay the price that is being asked for the releasing of their pictures.” I then asked if that was the reason he came to Los Angeles and he said yes. I asked if he thought they would succeed and he said surely they will have to come to our terms.

At about this time, the House Officer came to my door. I went to the door and he stated he was sorry but that the house would not allow any lady that is alone to have company in her room. Officer said he realized that no harm was done, but that it was the rules of the house. Gentleman left, saying that he would call me the next day.

Their report is dated January 27, 1919, although clearly their clients were briefed on their findings before then. The report is in the Mary Pickford Foundation files and is just too culturally revealing and historically relevant not to share.