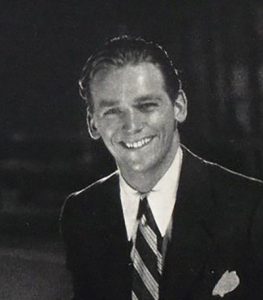 This article by Douglas Fairbanks Jr. about his father was the first in a series of articles he wrote about his friends and family for Vanity Fair. (His next one would be on his stepmother Mary, also reprinted here).

The magazine’s introduction noting that Vanity Fair had known Junior since “his tricycle days” was meant literally. Doug Jr had indeed ridden his tricycle at the Algonquin hotel where the Fairbanks often resided. The owner of the Algonquin, Frank Case, was one of Doug Sr’s closest lifelong friends, and Frank’s daughter Margaret’s first journalism job was as a writer for Vanity Fair. Just like Doug Jr., Margaret grew up around the celebrities of stage, film, and literature and just assumed that was normal. If that isn’t small world enough, the Vanity Fair offices and the Algonquin were only a block apart on 44th Street and, of course, the writers lunched there often.

The talented son of a famous star paints a portrait, in pen and ink, of his celebrated father 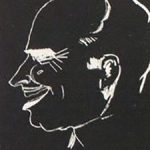 Being an actor primarily, he is a series of masks. . . . lie is constantly on edge. He is terrifically anxious that people around him he highly entertained, but that he himself be a little more highly entertained than they. He loves to prove his agility to those who entirely believe in it already.

One is completely overwhelmed by the force of his personality. He plays on that talent, lie radiates good will to all around him and his humour (though, alas, it is not always good) is delivered in a way that makes him seem a wit. He has long fits of depression; and it is at these times that he is most charming.

He is a man of great ego but little conceit; a man to whom success comes easily, but failure hard. Success is to him a habit and he is intolerant of reverses. He cannot endure being crossed, and it is hard for him to forgive a direct or personal slight. He can never quite concentrate on other people’s troubles, although he is sincerely sorry for them, and always ready with consolation. He is a generous man to those whom he likes.

He is ambitious to a fault, and an untiring worker. He can debate with equal energy on either side of any argument—not from insincerity, hut for the love of matching wits.

He never reads a long hook through. When he is unprepared to answer a question, he evades it in a breezy manner that, for some reason, leaves one satisfied. He is at once a poor and a great business man. He is bored with flatterers hut loves flattery. He is proud of his friends’ accomplishments hut prouder of his own. He can “sell” one on any idea, due to his own enthusiasm. 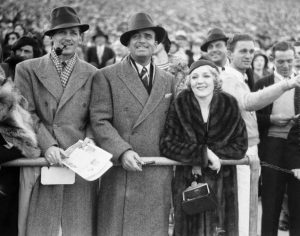 The four most important factors in his life are his work, his home, his play and his love of travel. He adores perfumes. He loves to sleep, and takes a nap every afternoon. One can always tell when he is tired because he invariably starts to rub his right eye vigorously with the outside of his hand. He loves all kinds of new games, and never gives up until he has mastered them. Practically every bone in both of his hands has been broken on account of this ardour.

He will go to any extreme to carry out a practical joke. He would give up any one or all three meals for a game of golf. On the links he almost invariably loses his temper, breaks his clubs on his knee and throws them to the four winds with mumbled curses.

He is extremely fond of Spanish foods. He eats with a manner that, although it may lack restraint, inspires the onlooker with an admiration for its gusto. When talking he is, at times, somewhat inarticulate, with a tendency to lisping born of carelessness. He takes a feverish interest in his wardrobe and is an authority on styles for men. He walks with a great deal of swagger and bravado. One of his chief worries is the possibility of baldness. He tries any new system that promises some improvement. He has never had a drink in his life, yet he smokes incessantly.

He himself is neither responsible nor thorough hut he is wise enough to surround himself with others who are. He is extraordinarily curious about everything. He has a passion for knowing things. He is a mild authority on almost everything. He loves animals. He is exceedingly self-conscious and easily embarrassed. He loathes any sort of demonstrativeness or show of emotion. He contends that he is totally devoid of sentiment and yet he is at heart a sentimentalist. He is ashamed of it. He is the perfect host.

His nature is such that he doesn’t think he is, nor does he pretend to he a great father, but somehow or other … he is.

In this pithy, and at times apparently contradictory article, Doug Jr’s love and admiration for his father comes through. The son was very forgiving of the father’s lack of involvement. Junior even seemed to accept his father’s harshest criticisms with a shrug. And of course Doug Sr was proud of him, but at the same time his vanity was tweaked by having a son old enough to be married, play all kinds of adults in films, and be in a position to write such an honest yet kind article.