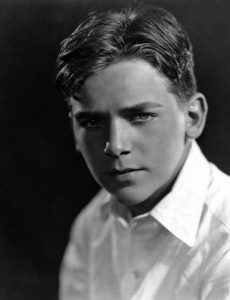 Doug Jr. first met his future stepmother Mary Pickford when he was eight years old and his father was still married to his mother, Beth. Mary accepted an invitation to join the family for tea at the New York hotel where they were living and Doug Jr. remembered wondering “how did such a little girl, only a little bit taller than I, get to be so important and go places all alone?” After bowing and completing a proper introduction, Doug Jr. returned to the floor to play with his trains. Mary asked, “May I play with them too?” and to young Doug’s delight, “she knelt down to the floor and joined me. Mary had made another conquest.” 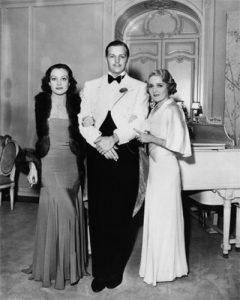 Jayar, as he was called by the family, wrote the following article for Vanity Fair in 1930 after Mary had been married to his father for a decade. Jayar was all of twenty-one and had just wed the actress Joan Crawford who several years his senior. His writing is much more affected and stilted here than it would be 50 years later when he wrote his delightful memoir, Salad Days, but it is an interesting snapshot of the time. Just the same, it feels a bit like he is trying to establish himself as Mary’s peer rather than her stepson. His style improved over the years by becoming a prolific letter writer and his propensity to stay in touch with friends would serve him well throughout his life.

Sid Grauman, the producer and playboy of Hollywood, is the culprit who is generally held responsible for the naming of Mary Pickford as “America’s Sweetheart.” It was several years ago when Sidney (for short) was the manager of a theater in San Francisco, that he was inspired to invent the phrase in connection with a film of Mary’s which he was showing at the time. It has stuck with unrelenting persistency ever since. 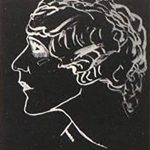 To one who knows her the title is rather inaccurate. She is much too austere for such a sentimental and weeping description. It would be more appropriate (if a little more blatant) to say that America is her sweetheart, for she has a great respect and affection born of deepest gratitude for anything abstract of concrete that has in any way been of service to her ambitions. It has been said of her that she was the eternal little girl with the woman’s mind. It is rather that she is the eternal woman with the little girl’s heart.

She is at times embarrassingly frank in her opinions and is wholly without fear of the consequences. She dares anything. She has a most thorough mind and never leaves a subject until she has discussed every possible angle of it. She is wholly feminine in personality; yet she is, in business, the most masculine in action of any of her associates.

She is always the dominating force of any meeting or consultation. She has the uncanny ability of being able to meet any emergency with the utmost poise and reserve. When called up to make a speech she sees to it that it is thoroughly prepared and that each word means something. There is evident in everything that she does the desire to conserve energy, of which she has more than the average share. 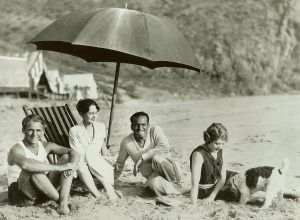 She is at once a tremendously selfish and an exceedingly generous woman. She is selfish in a righteous way for a woman in her unparalleled position. Everything must bend to her will and, although no physical effort on her part is ever exerted, things do bend.  When she is working there is nothing of greater importance during that time. She is completely engrossed in whatever direction her efforts lead her.

She scoffs at any self-conscious or affected mention of Art in the cinema, yet at the same  moment she bends every ounce of her many talents toward the creation of that art. She sincerely thinks before she makes a picture, and while it is in production, that it is going to be a masterpiece, but when she is finished she is equally sincere in thinking it is not good enough. She has been willing to sacrifice thousands of dollars and months of concentrated effort by destroying a film rather than release it for public consumption. However, her more mercenary associates usually discourage her from such wholesale gestures.

She is, unobtrusively, a great charitable personage. She is most admired for her great affection for her family. She is continually devising new schemes by which to make them happier. It is a great source of satisfaction to her. Beneath her exterior of stateliness there is always a suggestion of the small child away from her mother. That is only shown where she is with intimates. She loves secretly to appear just the slightest bit “bad.” 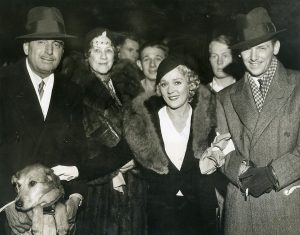 She has a delicious sense of humour that is evident only at rare intervals. She adores the ridiculous. Although she appears shocked, one gets the idea faintly that she appreciates a story that is just slightly shaded. One dare not make it more so.

When she is tired she wastes no time on formalities, even when there are guests in the house. She simply excuses herself and goes to bed. Somehow no one is every offended. She is the perfect diplomat by virtue of her impersonal demeanor together with the charm she displays in any embarrassing situation. She loves parlour games and invariably cheats herself at solitaire.  She takes a great interest in all sorts of numerologists, horoscope readers, palmists, and other fortune tellers, without believing in any of them to any perceptible degree. 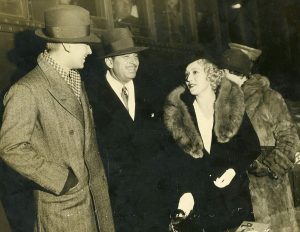 She speaks French fluently. She can dabble in almost any tongue. She laughs but seldom, but when she does it is a hearty, contagious laugh. Her voice when she is fatigued has a tendency toward throatiness. She is a valuable friend and a bitter enemy. She loves company. She is seldom, if ever, alone. She has what are termed “snobbish tendencies but is the most democratic of people. She would like to smoke but the taste is sickening to her. She adores candy and men’s perfumes. She chooses all her husband’s for him. She has beautiful taste in decorating a home, and dresses herself conservatively and well. Occasionally she can be heard to envy some tall, willowy woman – but it is a casual, conversational envy. She knows the value, to herself, of being little. She always notices people’s hands. People either like or dislike Mary immensely. This she knows, and she is gifted in making them feel toward her as she wills.

Many people think they know Mary well, but nobody really knows her. She, on the other hand, knows everyone in the first five minutes of an interview. She lends herself to confessions and confidences from other people without giving any herself. She wants to go down in history. And, since she has achieved through the force of her own effort everything she has ever wanted, I think she will. 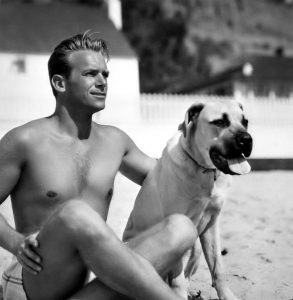 In 1930, Jayar was probably closer to Mary than he was to his father. When he was invited to Pickfair, it was usually Mary who did the asking, but he became better friends with Senior during the last ten years of his life. Jayar stayed close to Mary, who outlived Doug Senior by almost forty years, and visited her often. He said he held her hand when she was bedridden, confident her smile reflected her pleasure with their reminisces.