Like the Smiths, Lillian Gish, her sister Dorothy and their mother Mary, eked out a living touring with stage companies in the early 1900s. Sometimes together, often separately, they traveled the northeast. Lillian’s father had left the family for greener pastures when the children were still very young. While running a candy store by day, Mary Gish discovered the theater paid more and soon her daughters were cast as well. Let Lillian take the story from here:

“We made friends during those long tours on the road….Among our most durable and rewarding associations were those with a widow and her three children, who, like us, were child actors. 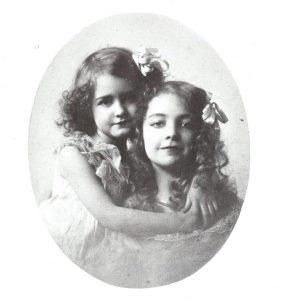 While we were in New York, Mother had met Mrs. Charlotte Smith and her three children, and sometime later our two families found that they could cut expenses by sharing a flat. Besides Mrs. Smith, there was Gladys, the older girl; Lottie, the middle one; and a dark, sturdy boy, Jack. We loved the Smiths, especially Gladys, who was like a mother to us. There was never any question when she told us to do something. We did it. She would take us to the theater, where each of us would present his card, which bore the name of his most recent play, and say to the man at the box office: ‘Do you recognize professionals? We hear you have a very fine play with good actors. Perhaps we could learn from them.’

The Man would look at Gladys. ‘Yes, how many seats do you want?’ 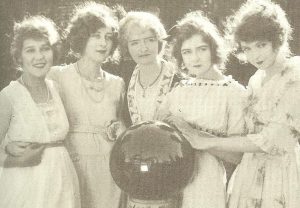 When Gladys said, ‘five, please,’ he would have to lean forward and look down, as some of the heads did not come as high as the box office window. After climbing up to the gallery for our seats, Gladys would say, “now you children listen carefully to the way they speak, and watch everything they do, as maybe we will play on Broadway.’

Lottie, Jack, Dorothy and I listened, not knowing that soon Gladys would be doing just that.”

The serendipitous way Lillian met Mary is made all the more special by knowing they stayed friends for life. And the story of Mary being the unquestioned authority of the group is all the more amusing when we realize that Mary was only a year and a few months older than Lillian.

From: The Movies, Mr. Griffith and Me by Lillian Gish with Anne Pinchot, Prentice Hall, Englewood Cliffs, New Jersey, 1969