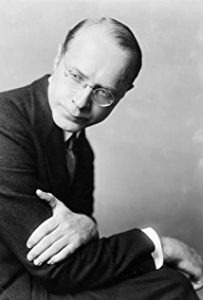 Donald Ogden Stewart, who would become a major screenwriter and Oscar winner in the thirties and forties, penning such scripts as The Philadelphia Story, Holiday and Life with Father, was, in April of 1918, a twenty four year old draftee serving in Chicago. In his autobiography, By a Stroke of Luck, he talks about one serendipitous assignment where he was in a unique position to witness the crowds who swarmed to see Mary Pickford during her Liberty Bond selling tour.

There were compensations [when] I was given a Quartermaster First Class rating, with the privilege of occasional nights away from the pier. I was even selected by the Commandant to be one of the squad of men six feet tall to escort Mary Pickford when she came to Chicago on a Liberty Loan drive. This was a great occasion. Mary’s speech was to be delivered in the Marshall Field store which was absolutely jam-packed with excited patriots. The duty of us escorts, carrying our rifles in the appropriate position, was to force a way for the film star through this mob to the speaker’s platform. It was a task for which I quickly found myself completely inadequate by nature and previous training. I began with ‘Please, if you don’t mind stepping back’ and ended in a crowded corner, hatless and rifle-less, trying to get back to my squad which had disappeared in the direction of the platform. The fans very kindly gave me my rifle back and I was saved from court martial.