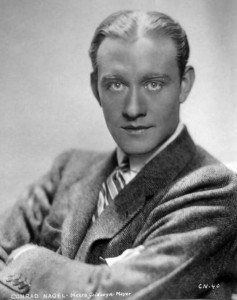 Conrad Nagel was a respected actor whose film career spanned from 1915 when he began acting in front of the camera for William Brady in Fort Lee, New Jersey through the mid-1960s. He was also one of those half-dozen men at Louis B. Mayer’s dinner table the night that the idea of the Academy of Motion Pictures Arts and Sciences was born; Nagel went on to serve as its President from 1932 to 1933.

In 1929, Nagel was one of fifteen representatives from the film industry to speak to students at University of Southern California during a course organized in part by the Academy’s then President, Douglas Fairbanks. Nagel’s contribution was entitled “The Actor’s Art” and in his speech he called special attention to a dilemma only an actor might notice, but one he credits Mary Pickford with overcoming.

In Coquette, which was Mary Pickford’s first talking picture, we have two excellent examples of the emotional appeal and the technical appeal. In this picture Miss Pickford has the same situation to handle twice, the death of a loved one. In the middle of the picture her lover is killed and at the end of the story her father kills himself. It is perhaps the most difficult thing an actor can encounter: the problem of handling the same situation twice in one performance. In the death of the lover Miss Pickford plays the scene emotionally; she not only tears out her own heart but the audience suffers with her. It is the high point of the picture. At the end of the story where the father kills himself in the courtroom it is impossible for Miss Pickford to repeat the dramatic and emotional reaction shown in the former episode, so she relies almost entirely on mechanics. After the death of the father in the courtroom, there is a slight pause and then Miss Pickford comes out; a dutiful friend is waiting and asks whether there is anything he can do for her. She looks up, smiles wanly and says, ‘No thank you, there is nothing to be done. I have to get home to help brother with his algebra.’ And she walks out of the courthouse and down the street toward her house. The effect, of course, is tremendous. It is a great question as to which of the two scenes is the greatest and most effective.

Today, it may seem that Coquette does not stand the test of time as well as many of Mary’s other films, yet Nagel’s observations help explain the nuances of her performance and why she won an Academy Award for Best Actress in the film.

Note on the lectures:

While neither Mary Pickford nor Fairbanks spoke, the participants included others who rarely spoke in public including Irving Thalberg, the screenwriter Clara Beranger and the producer Paul Bern. These lectures were reprinted by editor John C. Tibbetts in 1977 under the title of the course, Introduction to the Photoplay.